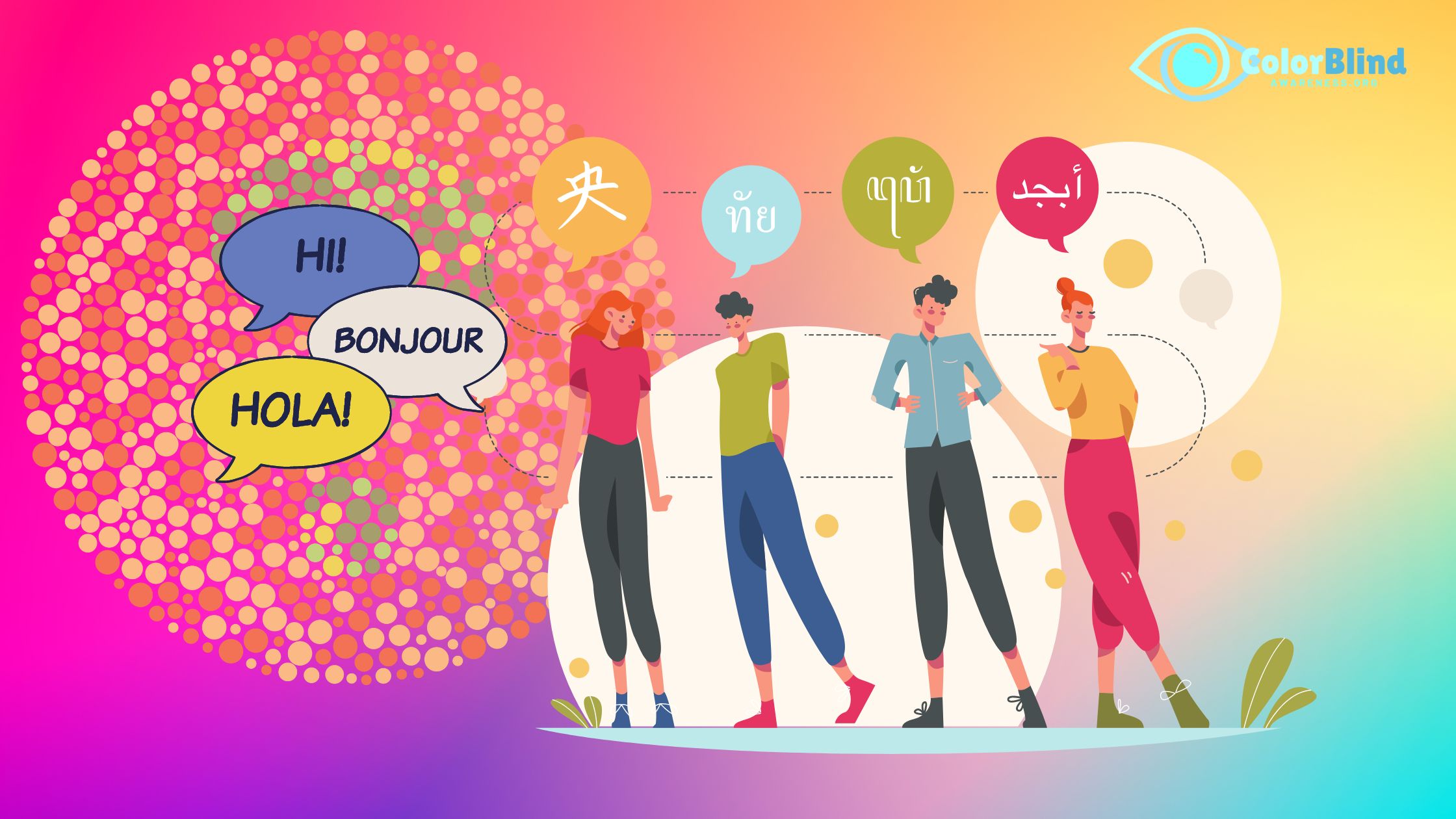 Color and language are two powerful tools that are often used together to convey meaning and emotion. From advertising and branding to art and design, safety, hazards, danger, hot or cold, on or off, color and language are closely intertwined and play a crucial role in how we perceive and understand the world around us. Color perception, the color terms, color categories, the words associates with the color all affect ones perception of color and all are subtly used in a form of color discrimination by the language you speak.

Color and language the connection

First, let’s take a look at the way color and language are connected. At a basic level, color and language are both forms of communication that can be used to convey meaning and emotion. Color, like language, has the ability to evoke certain feelings and associations, and can be used to influence the way we perceive and interpret the world around us. it is not as sophisticated as langue for doing this but within the cultural context color and its meaning has a lot of influence.

As a color blind individual I once wrote an essay on the transformer movies, an essay about the symbology or semiotics of the film. Within that essay I did not once mention the Decepticons red eyes. This is a clear symbol that they are the bad guys, red eyes are seen in demons, vampires and wolfs and therefore indicates quickly and clearly that the Decepticons are the bad guys. The problem is I am color blind and have no awareness of red eyes as red is brown and I was marked down for not mentioning this clear symbol in the film. My grad was reversed once I informed my lecturer of my color deficiency.

But the connection between color and language goes even deeper than simple association. In many cases, color and language are used together to create a more powerful and effective message. For example, when advertising a new product, a designer might use the color red to grab the viewer’s attention, and then use language to describe the product’s benefits and features. This combination of color and language creates a more compelling and engaging message, and can be much more effective than using either color or language alone. So, for us who are colorblind, a lot of the worlds subtle cues of how to think and feel will be missed as we do don’t perceive the color the way the masses do.

But why is understanding the connection between color and language so important? The answer is simple: effective communication. In order to effectively communicate with others, we need to understand how our words and actions will be perceived and interpreted. By understanding the way color and language are connected, we can create more powerful and effective messages that are better able to connect with our audience and achieve our goals.

In conclusion, color and language are closely interconnected, and understanding this connection is crucial for anyone who wants to effectively communicate and connect with others. By using color and language together, we can create more powerful and effective messages that are better able to grab the attention of our audience and drive our desired outcomes. By mastering the connection between color and language, we can improve our communication skills and become more effective communicators in all aspects of our lives. This is why, even us color blind individuals must take the time to understand the meanings and language behind the colors we struggle with, because if we do not we can miss so much of the world, subtle communications hid behind symbology and cultural norms.

Below is a snippet from a BBC article The Words that change the colours we see.

Different languages and cultural groups also carve up the colour spectrum differently. Some languages like Dani, spoken in Papua New Guinea, and Bassa, spoken in Liberia and Sierra Leone, only have two terms, dark and light. Dark roughly translates as cool in those languages, and light as warm. So colours like black, blue, and green are glossed as cool colours, while lighter colours like white, red, orange and yellow are glossed as warm colours.

The Warlpiri people living in Australia’s Northern Territory don’t even have a term for the word “colour”. For these and other such cultural groups, what we would call “colour” is described by a rich vocabulary referring to texture, physical sensation and functional purpose.

Remarkably, most of the world’s languages have five basic colour terms. Cultures as diverse as the Himba in the Namibian plains and the Berinmo in the lush rainforests of Papua New Guinea employ such five term systems. As well as dark, light, and red, these languages typically have a term for yellow, and a term that denotes both blue and green. That is, these languages do not have separate terms for “green” and “blue” but use one term to describe both colours, a sort of “grue”.

Historically, Welsh had a “grue” term, namely glas, as did Japanese and Chinese. Nowadays, in all these languages, the original grue term has been restricted to blue, and a separate green term is used. This is either developed from within the language – as is the case for Japanese – or through lexical borrowing, as is the case for Welsh.

Russian, Greek, Turkish and many other languages also have two separate terms for blue – one referring exclusively to darker shades, and one referring to lighter shades.

The way we perceive colours can also change during our lifetime. Greek speakers, who have two fundamental colour terms to describe light and dark blue (“ghalazio” and “ble”), are more prone to see these two colours as more similar after living for long periods of time in the UK. There, these two colours are described in English by the same fundamental colour term: blue.

This is because after long term everyday exposure to an English-speaking environment, the brain of native Greek speakers starts interpreting the colours “ghalazio” and “ble” as part of the same colour category.

But this isn’t just something that happens with colour. In fact different languages can influence our perceptions in all areas of life. In our lab at Lancaster University we are investigating how the use of and exposure to different languages changes the way we perceive everyday objects. Ultimately, this happens because learning a new language is like giving our brain the ability to interpret the world differently – including the way we see and process colours.

This article originally appeared on The Conversation, and is republished under a Creative Commons licence.

Did You Know Your Language Changes How You See Color?

Did you know that the language you speak influences how you see color? This phenomenon, known as linguistic relativity, suggests that language shapes how we interpret the world around us. While research has found correlations between language and color perception, there is still debate about whether language actually changes our vision or if it simply influences our interpretation of colors. For example, a person who speaks English may interpret blue differently than someone who speaks Spanish or Rusian – they may associate different feelings or emotions with the color. While this effect may be subtle, it’s important to remember that even the words we use to describe colors can have an impact on how we experience and perceive them.

Does The Language You Speak Determine The Color You See?

Language can be a powerful tool for communication, but does it have an effect on the way we perceive color? Some studies suggest that language can influence how we interpret and describe colors. For example, speakers of Russian and Hebrew have different terms for light blue and dark blue, which suggests they may perceive the two shades differently. Additionally, speakers of languages like Japanese or Chinese may have a more diverse range of terms to describe shades of color than English-speakers do. This could lead to a greater understanding of subtle differences in hue and saturation. Ultimately, research indicates that language can shape our perception of color; however, there is still much more to learn about how this influence works in different cultures and contexts.

Does every language have the same number of words for each color, or do some languages identify colors with more words, or less words?

The concept of colors is universal and it doesn’t depend on the language. However, each language has its own way to describe colors. Some languages have more words to refer to certain colors while some others might have fewer. For instance, English has 11 basic color terms while other languages like Russian, Turkish or Chinese have up to 24 different terms for the same set of colors. Besides, in many native languages there are more complex ways of describing colors that don’t exist in English, such as shades and tints. Furthermore, the same color can be named differently depending on the context and culture. Lastly, some languages might identify more subtle nuances in color than others do. All this shows us how complicated it must be for a person who speaks a language with few color terms to learn a language with more words for the same set of colors.